This weekend I attended a Nosework seminar with Andrew Ramsey and it was awesome! There were several dogs just starting Nosework, several dogs on odor, several SAR (cadaver) dogs and then there was Jake who didn’t fit into any of those groups. (He was, by the way, the only dog who ended up working outside on 2 of the 3 days as most of the dogs worked in the “training lab” set up in the seminar room at Pawsitively Unleashed in Stevens Point.)

My goal was to have Jake ignore more distractions so I will describe some of our training. 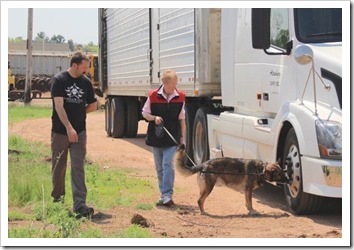 Jake will ignore his toys on the floor when they are “dead”. Specifically, he will search instead of picking his favorite balls up, etc. however, I knew for a fact that he gets VERY excited when that ball on a rope is moving so this is what we worked on the first day. Andrew would have his favorite ball on a rope and play tug with him after he searched and after I marked his alert. After the first time of doing that, Jake went into his over-the-top I-must-be-doing-bitework mentality and I had to clearly redirect him to search, but search he did and really fast so he could get that reward!! This did not look very pretty for the first few times because Jake wanted to go directly to Andrew. In the afternoon session, he really “got” it and Andrew was able to tease him with the ball while he was alerting to source. If he started to turn his head to look at him, I would say “alert” and he would recommit to the odor and not leave until I said “yes”!

Sunday, the second day, we worked outside knowing that Jake is usually distracted by the smells of ot 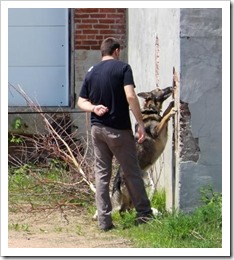 her dogs and critters. The first hide was on the wheel of a tractor trailer truck and Jake aced it. The second hide was along the wall of a deserted building. He sourced it and then a mouse ran by the hide into a hole in the wall of the building and that’s all it took for him to be distracted!! We got his attention and he alerted on the hide which was about 6 feet up on the wall. Several other hides went well I think in part because he knew that there was a possibility that he would get to play with that ball on a rope! In the afternoon, there were 3 hides along the front of the building and Jake found the threshold one but blew by the second because a bush was there and the odor from the 3rd was pulling him forward. He found that and came back to the second. The last for the afternoon were 2 hides on the truck and these were on a wheel and in between the brackets near a wheel which he had no problem finding!

Monday we went outside again and searched hides in a potty area and then along the front and the back of a long building. He ignored the smells for the most part. It appears that perhaps part of that problem is on the way to the start line rather than after I tell him to search because once he gets going he is less distracted. I’ll have to observe that. The building was pretty much like other searches he’s done – sourcing them all. Of course, we did have to discourage him from trying to take apart the water meter where one hide was and teach him to alert without dismounting it! The hi 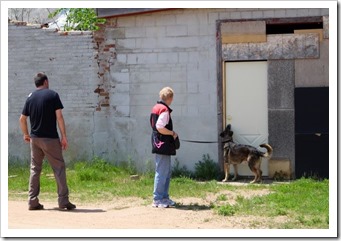 des outside were either small metal containers or a tiny piece of blotter paper that could be slid into cracks in doorways in addition to being placed anywhere a Q-tip could be hidden.

My challenge is to know when to call finish when I don’t know how many hides there are!! But how different is that from the master level in barn hunt anyway!?! Jake has an amazing alert so it’s just a matter of getting him close to the source and he’ll find it. Some of the outside hides were not accessible and I didn’t know where they were or how many there were. Another challenge is to learn to read the wind currents and make sure Jake searched everything including the ins and outs of the search area. Great weekend!! 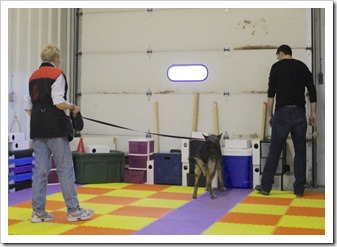 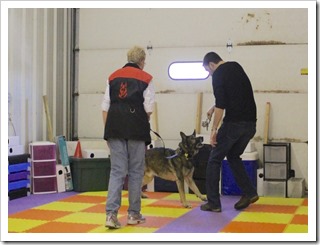 In between NOSEWORK days we did some BARN HUNT in Sheboygan and even though Jake hadn’t chased a rat in a tube for 7 months, he didn’t miss a beat!  He attained his RATCHX4 this weekend meaning that he has accumulated a total of 45 master legs!  In addition, he brought home a blue ribbon, 2 yellow ribbons and a high in class ribbon!!

Here are 3 videos from his runs! 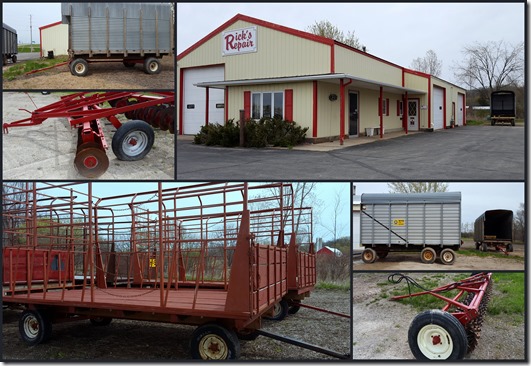 And here is the video and explanation that goes with it.

I often video but rarely post them because I’m taking them and they are pretty shaky and awful.  Today I really tried to get some good footage of Jake who tends to be a pretty active dog.  I’m sold on using a flexi for nosework (nothing else) because it doesn’t get tangled and I let Jake work farther away from me. It’s clearly a learning curve and I’m beginning to handle it better.  I am a clicker/marker trainer and believe that when I say YES that it ends the exercise and Jake returns to me for the reward.  When I say GOOD, he knows he has to stay in position until I say YES.  I’ve recently started pairing ALERT with GOOD and there is one find on the video where I say ALERT and he pushes back into the find until I say YES.  I feel that I talk too much and am working on that!    In order to not overface him, all the hides are accessible.  It’s pretty windy (NE17) and at the auto repair shop (5 hides aged 3 hours) that has farm equipment you can see him under the equipment on one side and then finding odor on the other.  The last 5 hides (aged 2 hours) at the vet office had the distractions of dog potty smells but I kept the hides off the grass at this time to help him be successful since he has only been doing nosework for 4 months.