What ARE you talking about, you ask???   A treadmill, what else?!?  Jake’s surgery resulted in his leg being a tad shorter because he has no femoral head so his back seems to turn.  He has been getting VOM treatments from Nancy and I feel that developing his back end muscles will really help…  so…  the treadmill it is!  More to come!
When we go to the basement and I’m doing something else, he hangs out on the treadmill.  Once I even caught him snoozing on it!  I guess that means he likes it! 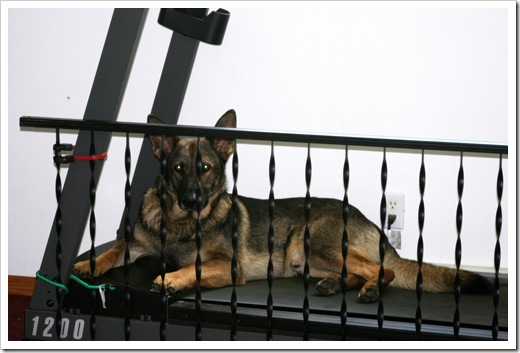 This video was taken 7/4 – slightly less than a month after we started.  I wanted to really take it slow and believe that it worked.  As you’ll see, when it’s faster he trots much better.  If I had it to do over, I would have increased the speed faster than I did.  You have to know your dog..  Brita doesn’t want anything to do with it and I wonder if I could ever get her used to it.  For sure, it wouldn’t be as easy as with Jake who is pretty fearless when it comes to new stuff and he thought nothing of it when he slid off the back a few times but rather just popped right up to get back on.  What a great dog!


August update - we're up to 4.5 miles per hour and 5 minutes.  People ask if I tie him to it..  no way!  It's all voluntary.  At one point I took the side down and he is fine but I have noticed that he stays as far from that edge as he can so I think I'm going to put it back and see if that makes a difference and he walks in the middle.
And then....
One day he got distracted and simply stopped walking resulting in him flying off the back of the treadmill into the wall behind it...  THIS, he was not happy about and he decided that the treadmill was EVIL and no self respecting German Shepherd should even get NEAR evil!!
And I'm sure as he pulled himself up from the floor he looked at Brita and agreed with her that she was right all along to stay away from the evil thing!
End of treadmill adventures!!  :):)
.
....
Email ThisBlogThis!Share to TwitterShare to FacebookShare to Pinterest
Newer Posts Older Posts Home
Subscribe to: Posts (Atom)