Around the yard we go and Jake brings me 5 bowls, 3 kongs and 3 toys… and puts them in my hand because he knows THAT’s what gets him the treat!

Oh by the way…. I was sweating when I came in but the weather people DID indicate that with the wind chill it was slightly above ZERO!

December 17. 2011
We officially started…  well we actually started some time back when I started teaching him to bring things to me… dog bowls, kongs, bones…  things right before eating so he was really motivated.  At first he pretty much threw them at me but we have progressed from that unacceptable behavior to putting whatever he has in my hands.

We regularly go out in the yard - me with a cart and he picks up the toys, bowls, kongs and bones that are laying around and I deposit them in the cart.  Just last week he picked up 14 items for me and wanted to keep doing it but there was nothing else to get.  Sometimes if he doesn't see something right away he takes something out of the cart and hands it to me.  I explain to him while I certainly appreciate the effort, there will be no reward for that because I want things to go IN the cart not OUT of it.  In hindsight, he has always wanted to help me outside since he started pulling out the buckthorn trees when I told him to…. and the only reward for that was to be able to pull it out and drag it away.  If it was too small he wasn’t interested.

He also carries things upstairs for me from the basement.  I take a small purse or some type of bag and put something in it.. maybe a can of soup or 2.  Last week he drug a pair of jeans up when I asked him to.  This week I had him to the office and he hung out in my room while I was teaching.  He wore a harness and the office people were told to ignore him when he has that on which was VERY hard for some of them.  I dropped my keys in the parking lot and thought…  hmm.. he’s right here… so I told him to get them and he did and handed them to me so that was what always seems to fall for the last few days so he could get used to them.  I noticed he picked them up my a soft key tab rather than the actual keys!

He walks quite nicely next to me when he is alone but when Brita is along it’s a whole different story!  Then he thinks he has to lead and pulls ahead.  I have NO plans to put his harness on under those circumstances… would make NO sense and there would be NO purpose for it either. 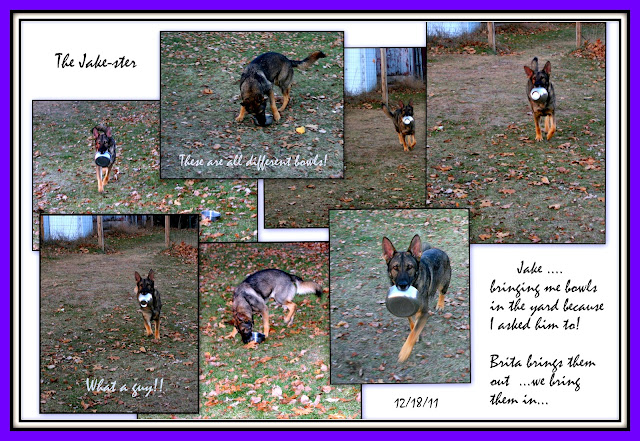 January 21, 2012
So I did something to hurt my back.  Yesterday my leg started going to sleep when I was teaching and someone suggested it might be a pinched nerve…  duh – why didn’t I think of that!  At that time my back didn’t hurt.  Then last evening it started hurting – lower back.. came on pretty fast it seemed like.  This morning… yup…  it hurt..  It was hard, no... it was impossible, to bend over – but hey..  I have Jake.  So…

First thing he collected what clothes and shoes I needed to get dressed and then throughout the day:

February 21, 2012
As I sit at my computer before supper, Jake who knows I have treats in my pocket starts bringing me things...


So after he cleaned up everything on the floor, he started taking paper from the trash can and giving it to me!  uuummm... no..  sorry - no reward.  Like the other day he started bringing me plastic bowls and I wondered where he got them...  well a lower cabinet door was open so he was taking them from there!  What a guy!
Jake’s Service Dog vest finally arrived.  Aside from the fact that it took me forever to decide what I wanted, it ended up being a special order so it took a bit longer but I really like it!  So my thought it to start a log of places we go.  He is, by the way, amazing.  Yesterday I dropped a towel over the deck railing that I had put there to dry and he ran down the stairs and around the deck, picked it up and brought it back to me.  I can tell him to get his “bowl”, “Kong” or “bone” in the yard and he’ll bring it to me as I stand in the doorway.  A few days ago I dumped a bag of sand in his sandbox and didn’t have a scissors to open it with me so I told him to “dig” and he did, ripped the plastic open and then pulled the plastic out and emptied the sand into the sandbox.  THAT was fun for him! When I had him in class a few weeks ago, I dropped my eraser and he practically dove for it so he could hand it to me.  What a guy!    So anyway….

March 27, 2012
Took Jake with me yesterday to lunch at Copps and to the bank in his new Service Dog vest...  he was amazing.  I was nervous at the salad bar at the grocery store..  made him sit every time I stopped and then again at the checkout and the lady said "That's the best trained service dog that has ever come in here!"  ...whew..  ..then he laid by the table for probably 90 min while my friend and I had lunch.  Next we went to the bank and he totally ignored others and just focused on me.  I would drop things just so he could do something (to show off) and work for his paycheck (treat)!  There were lots of ooohhhhh and aaahhhhh at how handsome he is and what a good dog he is!  Thank goodness that no one in a bitesuit or a Schutzhund sleeve showed up but then what IS the chance of that happening in a bank anyway!!

April 10, 2012
Another trip to the bank. He totally ignored everything around him and never took his eyes off me.  Plan to teach him how to open the automatic doors.

Read more that I wrote about Service Dogs by clicking here. 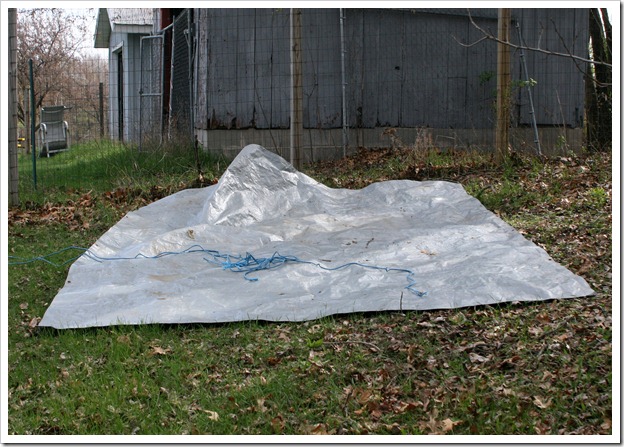 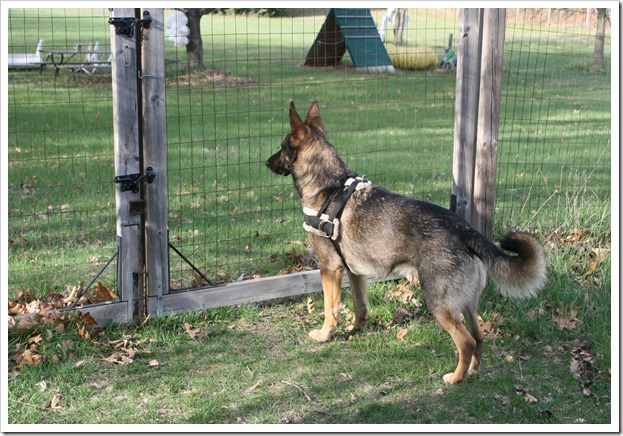 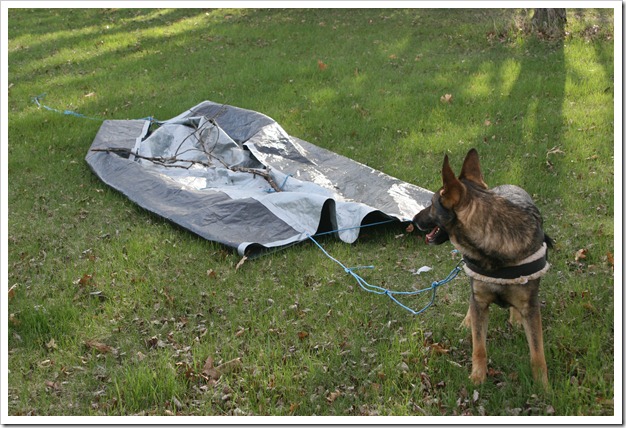 I see help with yard work!!! 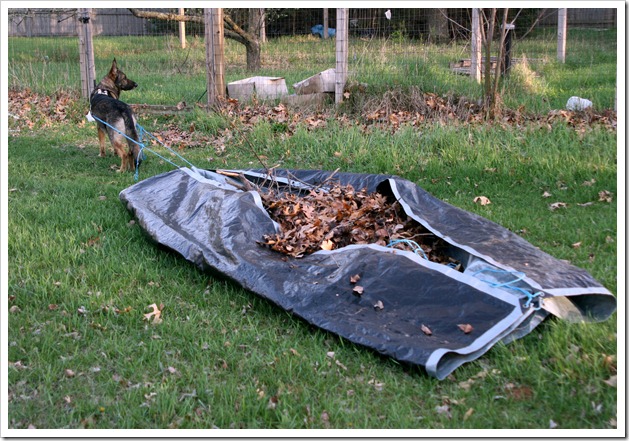