So I get a UPS notification that a delivery is arriving today and thought, omg, what did I order that I don't remember ordering... that's never happened! Then I receive this beautiful acrylic award (5" round 1" thick) from Robin to acknowledge Jake being the first RATCHX! Thank you Robin! 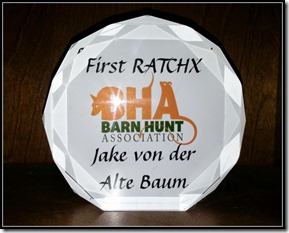 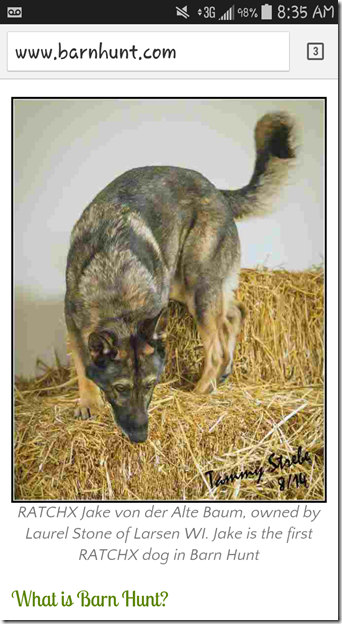 Special Note #1: We may expand to three days!

Special Note #2: The National will again be a special event and titling legs will not be awarded at the National. Qualification criteria are TBD. However, the German Pinscher Club of America, who are holding their National on the 11th, are going to offer a Regular Barn Hunt trial on Thursday September 10! Woot!

Special Note #3: Friday the 11th will be Zipper's 10th Birthday, and since Zipper is the dog who inspired the sport, we will have to do something really fun and special for him. Like most guys, he'll be embarrassed. We don't care. All National Attendees will be invited to his Birthday Party.

Barn Hunt Association, LLC A Specialty show is not the same as a National. The National has a pre-requisite to enter. It is not a regular show. There are progressive rounds of competition, and only the top 50 get to progress to the last two rounds of competition. The courses will not be regular courses. We also have special classes such as the Games classes which are not held at a regular trial.
This is not just an ordinary show with "National" pasted on it. The dogs who are given medals at the end of the National have something you cannot get at a regular show. September 17 at 7:46am · Like · 6