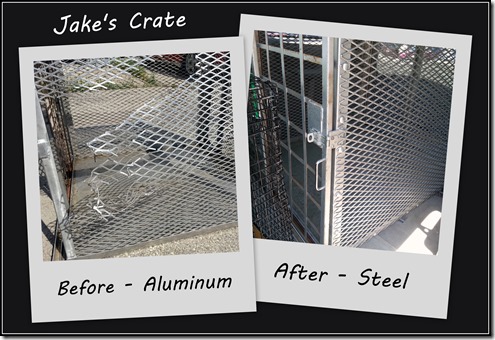 Where are they now?

Where are they now and what are they doing? Jake and Otter that is??

Fast forward a year and Jake's new adventure is DOCK DIVING and, low and behold, who do we meet at training today but Danae and Otter!!! Just goes to show that not only can English Cockers and German Shepherds excel in Barn Hunt but they also LOVE Dock Diving!!

Jake made the news!

Jake made the WFRV-TV Channel 5 news in a video on the Dock Dog competition at Cabela's today! He is shown 4-5 times throughout the video! And what a guy - first time with the Dock Dogs organization and he placed 2nd and 3rd in his 2 jumps with over a 13' jump! Each event he has increased his distance by a foot! Not bad for a dog who didn't know how to swim 6 months ago! THANK YOU SwimDog Wellness Center!

TAKING THE PLUNGE: Dogs in Wisconsin were flying high yesterday during a Dock Dogs Competition outside a Cabela's.

After competing in only one weekend trial since last October, Jake didn't forget what his job was!  He was a machine on Saturday after a day in the sun on Friday at Cabela's in Green Bay to participate in the Dog Diving event. His 4 rat run was 1:49 and his 5 rat run was 1:58 winning him High in Class for each run.  He even tried to help me out by delivering the tube directly to the rat wrangler who was ready to take it until I told Jake to give it to me first!! (I'm not kidding! - videos don’t lie!)  Sunday he was a bit sluggish in the morning and I wondered if it was because he was tired but do believe now it was because he only had ONE rat and felt that it was barely worth his time on the course.  He did however pull out a second place with a 2:05 run and his RATCHX3 title.

As many of you know when I reached RATCHX2 I declared I was now going for speed because I didn't feel like we were improving but rather just collecting Q's.  So,  I set the goal of averaging 2 minute runs (Master allows 4.5 min.) and am happy to say that in the last 10 legs we came close to that with an average time of 2 min. 6 sec.  when previously our average was about 2 min. 46 sec.!!  However, the last 7 trials our average was 1 min, 57 sec.!!   So now what?  Well I told Jake the only thing to shoot for is averaging 1 1/2 min. runs between now and his RATCHX4!   I figure it will take us until at least next summer since I've chosen to only participate in local events (2-3 per year) from now on.

This was posted on the Great Lakes Barn Hunt Facebook page!  thanks Brenda!  Brenda Coffield at Winnegamie Dog Club

IT'S RATCHX3 JAKE. Jake von der Alte Baum "Jake", a German Shepherd Dog owned and handled by Laurel Stone of Larsen, WI, picked up his 45th Master Q today at Winnegamie Dog Club in Menasha, WI to claim his new title RATCHX3. Jake hasn't lost his barn hunt touch, even though he has been spending a lot of his time dock diving. Jake also has the distinction of having earned the first RATCHX in barn hunt history.

You, Deb Krsnich, Karen Alvarez, Nancy Yeoman and 42 others like this.

WDC does a fine job!!

Thanks to Winnegamie Dog Club for hosting another great Barn Hunt trial. As always it was a fun weekend!

Congratulations to all the dogs and handlers who competed at this weekend's WDC Barn Hunt trial. We had 4 teams earn RATCH and RATCHX titles, including club members Amy Hanneman, Eric Madsen, and Laurel Stone. Here is the link to the rest of this weekend's photos:https://picasaweb.google.com/winnegamiedo…/2015BarnHuntTrial