With the prospect of being sidelined by 2 knee replacements last winter and having an overachiever dog around I decided to venture into the sport of Nosework.  I bought some videos but needed more to get started on my own.  It was recommended to me that I take some of the Fenzi online classes in nosework and I was hooked.  These courses are 6 weeks long with usually 4-6 lectures each week with homework and they followed a logical progression to learn the sport.  They are offered every 2 months and since the beginning of the year we took the first 3 beginning courses and combined those with 4 advanced courses.  With an average of 100 hides/week, Jake progressed quickly.  In the spring, we joined weekly classes at Ideal Dog Trainer in Neenah and Pawsitively Unleashed! in Stevens Point and attended a 3 day Andrew Ramsey workshop in May in Stevens Point.   During the summer we did some training with Haus von Stolz Police K9 Training in Lomira and introduced him to narcotic detection.  In September, Jake competed in local UKC Nosework trials and successfully completed various elements in the novice, advanced and superior levels with a total of 10 titles (elements plus level titles).  In October, he was certified as a Narcotics K9 and participated in a 2 day search in a correctional institution where he proved just how much stamina he has (3 hours first day and 2 hours the second) and how accurate he is outside on grounds and inside in lockers, training rooms and inmates rooms!  I can't tell you how proud I am of this dog!  He has so much drive and ambition to do anything I ask of him!  What a guy! 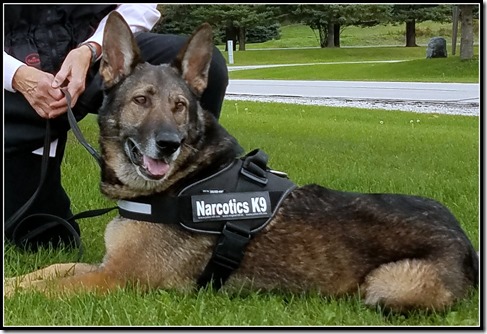